This is a sharpie sketch of Sleeping With Sirens guitarist Jack Fowler’s Gibson and Epiphone Les Paul guitars. Jack Fowler has played these guitars all summer long with Sleeping With Sirens at Rockstar Energy Drink DISRUPT Festival. This piece of music art captures the images of each Les Paul guitar along with their details. 100% cotton, preshrunk, printed on high quality AS Colour tees.

These guitars have ebony fingerboards with abalone inlays between certain frets. However, the red Gibson Les Paul guitar on the left does not have block inlays, but rather trapezoid-shaped inlays. Plus, there is no inlay between the nut and the first fret, unlike the other three Les Paul guitars. These guitars are one-piece guitars, which means they do not have any detachable parts such as the neck, due to the way they were designed and built.

The two Les Paul guitars on the left are from Gibson, and the two black Les Paul guitars on the right are from Epiphone. The way you can tell is by noticing the differences in shapes of the headstocks, as well as the logos on the headstocks. These guitars all have nickel Fishman Fluence Classic Humbucker pickups, except for the one on the far right, which has black nickel Fishman Fluence Classic Humbucker pickups.

The black Les Paul guitar on the far right is an Epiphone Matt Heafy signature guitar. It has all black hardware and does not have bell knobs like the other three Les Paul guitars, but rather black speed knobs. Jack modified this guitar by swapping out the existing pickups, which were black EMG active humbuckers, with passive black nickel Fishman Fluence Classic Humbuckers. Plus this guitar has a different neck heel shape unlike the first three guitars, as the neck heel is contoured, which allows more playability for higher frets.

Out of all these Les Paul guitars, Jack Fowler uses at least three of them while performing main sets with Sleeping With Sirens during DISRUPT Fest. He does not play the same exact guitars for the same songs on every date of the tour; the guitars are interchangeable. Plus, he does not keep them all in the same tuning, as he changes the tuning on some of them for certain shows. 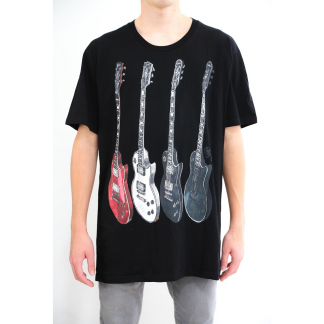