This is a sharpie sketch blink-182 singer and bassist Mark Hoppus’ custom Jaguar Basses that were built and assembled by Matty Baratto. 100% cotton, preshrunk, printed on high quality AS Colour tees.

Matty Baratto built the bass bodies and pickguards, while the rest of the parts such as the necks, strings, and hardware came from. Mark started playing Jaguar Basses from Matty Baratto in 2019. Unlike Mark Hoppus’ other American Standard Jaguar Basses which have rosewood necks with block abalone inlays, these specific Jaguar Basses have rosewood American Professional Precision Bass necks with white dot inlays, despite that these basses are technically not Precision Basses. Plus, these basses do not have bridge pickups, and only have inverted neck pickups like Mark’s white reliced Jaguar Bass. 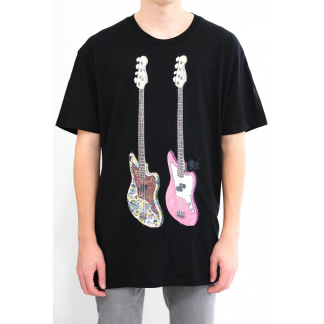