This is a sharpie sketch of the entire Sleeping With Sirens guitarsenal for Rockstar Energy Drink DISRUPT Festival this summer. This guitarsenal consists of Jack Fowler’s four guitars and Nick Martin’s one guitar as well as Justin Hills’ two basses used for this tour. These were used during the band’s main sets at Rockstar DISRUPT Fest. 100% cotton, preshrunk, printed on high quality AS Colour tees.

In front are Jack Fowler’s Gibson and Epiphone Les Paul guitars. Jack would use three out of these four guitars while performing main sets with Sleeping With Sirens at Rockstar DISRUPT Fest. He would use certain guitars for certain days of the tour, and would even change the tunings for some of them.

Following Jack Fowler’s guitars is Nick Martin’s black Ernie Ball Music Man StingRay guitar. Nick only used this guitar throughout entire live sets with Sleeping With Sirens at Rockstar DISRUPT Fest and did not swap out this guitar with any of his other StingRay guitars for songs in different tunings, unlike Jack and Justin who swapped instruments for songs in the key of C and D.

Behind Nick’s StingRay guitar are Justin Hills’ two Ernie Ball Music Man Cutlass basses, one of which is custom. The black Cutlass bass was primarily used for the majority of Sleeping With Sirens’ set, which consisted of songs in Drop C tuning. The light blue Cutlass bass was used for songs tuned a whole step higher in Drop D, such as “We Like It Loud” and “Better Off Dead”. After the second chorus of the song “We Like It Loud”, Justin would balance the light blue Cutlass bass upside-down by placing the headstock of the bass on his palm for a few seconds before tossing it in the air and catching it. The band would extend the timeframe of this song after the second chorus to give Justin time to pull off his special stunt.

Please note that these guitars and basses were specifically used during live sets at Rockstar DISRUPT Fest, and that none others which were kept in the vault beside the stage being used for backup were included in this collection. 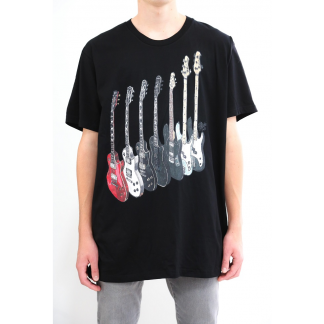