This is a sharpie sketch of All Time Low bassist Zachary Merrick’s Precision Basses. 100% cotton, preshrunk, printed on high quality AS Colour tees.

The black-and-red Precision Bass on the left is a custom-painted Mike Dirnt Road Worn Precision Bass that was given to Zachary by Mike Dirnt himself. Yet, this bass is not road worn. Unlike regular Precision Basses, this bass has a Telecaster headstock shape, a different shaped pickguard, a side input jack, and a control plate for the volume and tone knobs. Also, the type of bridge this bass has does not allow for it to be strung through the body, but rather topload only. In fact, the large metal mass in the bridge allows for the sustain to be solid, along with providing other benefits such as strong intonation and stable tuning. Another interesting thing about this Precision Bass is that it only has a forearm contour and not a tummy contour.

The black Precision Bass is a custom-built American Standard Precision Bass built by Billy Siegle, artist relations manager at . Zachary Merrick started playing this bass while touring with All Time Low for their album Future Hearts, which was released in 2015. The way this Precision Bass is custom is that it has a matching headstock and black nickel hardware, which regular Precision Basses do not have. On the headstock next to the logo, the words ‘Precision Bass’ are not written. If you notice the little thing sticking out behind the headstock, it is a Hipshot Bass Xtender, which allows the low string to be detuned a whole step down – all with the flip of a lever!

Lastly, the white American Professional Precision Bass V is Zachary Merrick’s first five-string bass. Unlike the other two Precision Basses, this bass is not custom. However, the pickguard is a black mirror pickguard, which allows for imagery to be reflected. Zachary would use this bass for playing songs such as “Dirty Laundry” and “Dark Side of Your Room”, which are both featured on All Time Low’s album Last Young Renegade. 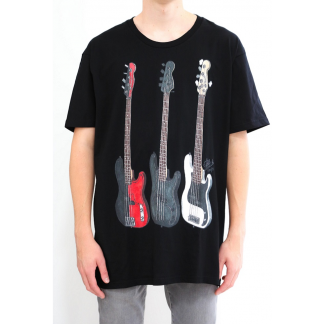