This is a sharpie sketch of All Time Low frontman Alex Gaskarth’s Telecasters. Alex used these during All Time Low’s 10-year anniversary tour for their album Nothing Personal in late 2019. Pictured left to right are a Classic Series ’72 Telecaster Deluxe, two Chris Shiflett Telecaster Deluxe models, and an American Professional Deluxe ShawBucker Telecaster.

In the middle are two Chris Shiflett Telecaster Deluxe signature models in black and shoreline gold. These guitars are very similar to the Classic Series ’72 Telecaster Deluxe since they have the same neck shape and control wiring, and were built in Mexico. However, the fingerboard material is rosewood, and the types of pickups are different. Installed in these guitars are nickel CS1 bridge pickups and CS2 neck pickups, which are smaller than the wide range pickups, and produce a slightly different sounding tone.

The Telecaster on the far right is an American Professional Deluxe ShawBucker Telecaster, which is the exact same model that Jack Barakat has customized versions of. However, Alex Gaskarth did not have this guitar customized the same as his fellow bandmate, and preferred to have it be like the regular stock model. Yet, the original Shawbucker 2T chrome bridge pickup was swapped out with what looks like either a Seymour Duncan 59 Model Humbucker pickup or a Tim Shaw Double Tap Humbucker pickup, since the pickup screws are aligned straightly. What is different about this guitar unlike the other three is that it has a traditional Telecaster headstock shape along with having an extra 22nd fret and a different type of fret wire, since it is part of a different series. The frets on this Telecaster are narrow tall frets, which is a common feature on American Professional series models, unlike the frets on the other three Telecasters which are medium jumbo frets.

Overall, these are the Telecasters that Alex Gaskarth played during All Time Low’s 10-year anniversary tour for their album Nothing Personal. 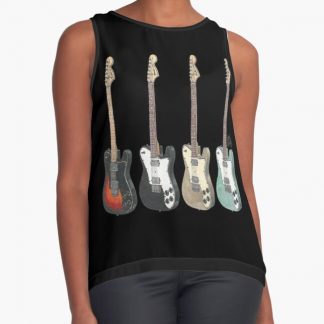