This is a sharpie sketch of Simple Creatures custom Jaguar Basses that were built and assembled by Matty Baratto. Simple Creatures are a trash pop/synth pop duo consisting of Mark Hoppus from blink-182 and Alex Gaskarth from All Time Low, who formed in early 2019. Mark plays the black Jaguar Bass on the right, while Alex plays the white bass on the left during certain songs.

The bodies and pickguards of these Jaguar Basses were manufactured by Matty Baratto, while the rest of the parts such as the necks, strings, and hardware came from . Unlike most Jaguar Basses, these specific ones have rosewood American Professional Precision Bass necks with white dot inlays, despite that these basses are technically not Precision Basses. If you look closely, you can see that the words “Precision Bass” next to the logos on the headstocks are sanded off. Plus, these basses do not have bridge pickups, and only have inverted split neck pickups. The black Jaguar Bass on the right has a white pearloid pickguard, while the white Jaguar Bass on the left has a black mirror pickguard.

Mark Hoppus plays the black Jaguar Bass during the majority of live shows with Simple Creatures, while surprisingly, Alex Gaskarth plays the white Jaguar Bass on some songs where Mark plays guitar. On the songs where Alex plays the white bass, Mark plays a white Custom Jazzmaster with only one Seymour Duncan zebra humbucker bridge pickup, one volume knob, a black custom pickguard, and an Evertune G Model bridge, which surprisingly, is meant for Gibson guitars. During the songs where Mark plays the black Jaguar Bass, Alex plays a black  Custom Jazzmaster similar to the white one Mark plays. However, the black Jazzmaster has a white custom pickguard, two Seymour Duncan zebra humbucker pickups positioned at both the bridge and neck, a volume knob, and a toggle switch for switching between the pickups to get a different sound and tone. Alex’s black Jazzmaster also has the same type of bridge that is installed in Mark’s white Jazzmaster.

Overall, these are the custom Jaguar Basses used in Simple Creatures. 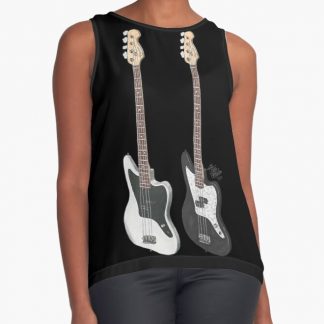